The SMARC (“Smart Mobility ARChitecture”) is a versatile small form factor computer Module definition targeting applications that require low power, low costs, and high performance. The Modules will typically use ARM SOCs similar or the same as those used in many familiar devices such as tablet computers and smart phones. Alternative low power SOCs and CPUs, such as tablet oriented X86 devices and other RISC CPUs may be used as well. The Module power envelope is typically under 6W.

Two Module sizes are defined: 82mm x 50mm and 82mm x 80mm. The Module PCBs have 314 edge fingers that mate with a low profile 314 pin 0.5mm pitch right angle connector (the connector is sometimes identified as a 321 pin connector, but 7 pins are lost to the key).

The new global standard under the brand name ‘SMARC’ is based on ULP-COM, the term which up to now was used for Ultra Low Power Computer-on-Modules. 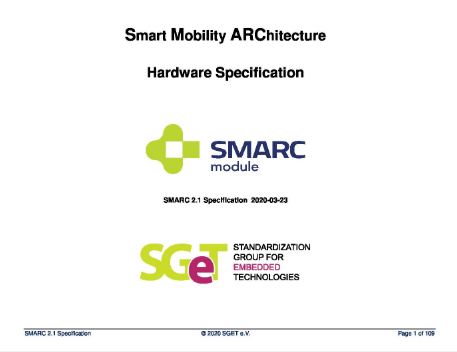